I came into this world as a Utility Guy, and it’s as a Utility Guy I will die. Songwriting is fun, and interesting things have happened as a byproduct, but what I’m best at is being a support player.

My first musical inspiration was Dave Letterman’s band. All of them: Anton Fig on drums, Will Lee on bass, Sid McGinnis and Felicia Collins on guitars, and Paul Shaffer as keyboardist and bandleader. I used to get up at 1:25am, to sneak out to the living room and see who they were playing with tonight: James Brown? Sheryl Crow? Toots and the Maytals? Their versatility spoke volumes to me. Same with the Saturday Night Live bands over the years. Real deal musicians: creative night after night, always in service of the Artist’s vision for the song. They made me the kind of school band geek that breaks into the music room to play over lunch, stays after school, plays in every school band, community theatre pit orchestra, goes and does a Music degree, and whose faculty advisor says:

“Okay: I’ll let you in as a Percussionist, but I don’t care what town you eventually move to; you’re going to work as a Bassist, because you play Bass with a Drummer’s sense of timekeeping, and there are so few good bass players out there. Since you also play guitar, I can’t figure out for the life of me why you don’t take classical guitar and get your fingers moving for bass, that’s what Tony Levin did.”

So, dear friends, let it be said that if you need a rhythm section guy, who sings, and can switch up instruments, and does not believe in doing impolite things in enclosed spaces, I’ve got your backs. 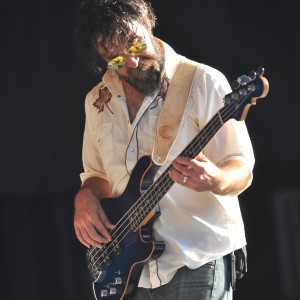