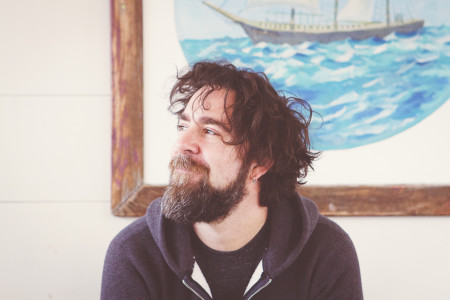 This little record very much owes its existence to the village of people surrounding this particular musician.

Firstly and lastly, my partner in everything that matters, Stephanie Domet. Charlie A’Court, Keith Mullins, Kim Wempe, Stephen Fearing, Brooke Miller, Jont, Heather Green, Chris Kirby, Aselin Debison, Bob Ardern, Manitoba Hal, Steven Bowers, Jen Roland, Gillian Boucher, Jill Barber, Home Routes (and the heroes who host house concerts everywhere), Geneviève Béland at VIARail, Ron Bourgeois et le gang Pour l’Amour du Country; Candy Palmater and the gang from The Candy Show (two #NSFilmjobs without which this record honestly might not have happened as it needed to); Tamara Kater, The Company House, Annette Hunziker, Georgia Richards, The Carleton, Moksha Yoga Halifax, ArtsCan Circle, Brad Goodsell Design/Build and my beloved crew. Music Nova Scotia. Alka Sharma and Jen Ellis at Folk Music Ontario. Tannis Slimmon and Lewis Melville (so much of this is thanks to you), Shawna Caspi, Stephen&Christine, Jen&Aidan, Jayghan (you have caught the longest Hail Mary pass in history, and I can never thank you enough), John&Jules, Sue&Pete, Shandi&Alan, Don Ross, my Charlie’s gang (great OJ, T, thanks), the people who are kind enough to have me come out to play for them, or play me on the radio, and firstly and lastly, my partner in everything that matters, Stephanie Domet, without whom, nothing. I would be nowhere, but for you all.

‘River Off the Lake’ was inspired by a piece of writing Joseph Boyden did in the Globe and Mail on canoeing the Moose River, which resonated with my experience canoeing on the lake across the road from my house when I was a kid. I wrote the song for Millie Perritt, and sang it to her just as she was passing. The piano was recorded on an amazing Bösendorfer Concert Grand at DanLyn Studios, Sherwood Park AB, by Jerry Woolsey. (Thanks, Dan and Connie.)’Sorrow On My Mind‘ was written with Tannis Slimmon and Lewis Melville, and mostly recorded (along with a lot of the demos that started this record) at the Sound Emporium, Guelph ON.

‘The Ballad of Slim McInnis’ is mostly a poem by John J. ‘Slim’ McInnis called ‘Dosco’s Inferno’ (1945) written about life inside the Sydney Steel Mill, where he and my dad’s dad worked. I call it a co-write that took 60-odd years to happen, but it’s mostly his.

[NOTE: ‘Dosco’ was the colloquial name for the Dominion Steel and Coal Corporation (1928-1968) of Cape Breton NS Canada, and has no relation to any other company past or present operating anywhere in the world under any similar name.]

‘Bury Me By the River’ was written with Steven Bowers and Keith Mullins, and is dedicated to our late pal Fleur Mainville, who asked for me to sing it at her service.

‘Thunderbird’ is dedicated to Jordan Wabasse.