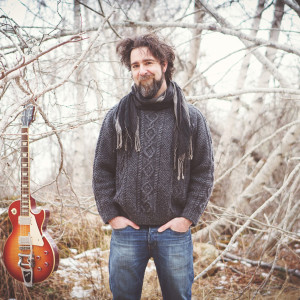 Kev Corbett is great! Not sure what we like best: the hook-filled tunes, the authenticity, or the great arrangements. But for those of us who remember when the likes of Elvis Costello and Nick Lowe were wildly popular with the masses, Corbett is the spiritual heir who deserves to be heard by a very wide audience.  – Mark Rheaume, CBC Radio

There’s nothing better than a musician who knows how to be an individual, and to carve out their own piece of the landscape. Although this Nova Scotian is a beloved sideman for many East Coast artists, when he does get out on his own he has a singular vision for his writing, his vocal presence, his playing, his overall KevCorbettness. He’s a deep-thinking folk-rocker seemingly plugged into the land.

A multi-instrumentalist, Corbett basically put the whole thing together with producer Jason Mingo, all the better to let his individualism come through. It’s a pleasing blend of rough and ready; his voice is unpolished but true, the playing bang-on but never busy. He’ll rock it up sometimes, make it a little bigger, like with the driving beat and keyboard parts in Nowhere But For You, but it still sounds organic and somehow rural. Match it all with the level of thought going into the lyrics, and we have a set of songs here that feel rough-hewn but artistic, like a chainsaw carving.

Rural life does play a big part right across the set, whether its from nature or a canoe trip, or by the tale of life in the Sydney Steel Mill, taken from a 60-year old poem, and turned into a crazy electric blues in The Ballad of Slim McInnis. On the calmer side, Bury Me By The River has the country charm of a Rick Danko vocal. Sorrow On My Mind is the oldest-sounding cut, sounding like a Civil War number, with banjo and guest harmonies and a great big chain gang percussion sound. Eclectic, sometimes electric, it’s your basic Kevcorbettness. – Bob Mersereau, Top 100 Canadian Singles Blog

Kev Corbett – On The River Off The Lake (Independently released CD, Pop)
Instantly unique and likable modern pop from Nova Scotia’s Kev Corbett. When we hear a pop musician we’re almost always immediately reminded of someone else. In this case, we can’t really come up with any obvious comparisons or soundalikes. And that’s probably because this cool fellow seems to be creating music purely out of his own unique perspective…not trying to emulate anyone else…and not trying to impress anyone in particular. Genuine might be the best word to sum up this album. On The River Off The Lake presents nine songs that seem to come straight from the heart. Hearing this guy sing, you almost get the impression you’re listening to someone talking to you rather than singing. The intent here seems to be clear. This is a man who is, first and foremost, making music because that’s what he enjoys doing. In a world full of copycat artists and technology-driven music, these songs are like a real blast of fresh air. Cool tracks include “On The River Off The Lake,” “Nowhere But For You,” “Queen Among The Witches,” “Thunderbird,” and “Rome Didn’t Fall In A Day.” Recommended. Top pick. -babysue.com

“The man is an exceptional guitar player – for one thing – but also writes extremely clever, finessed, clockwork folk-pop songs whose singable surface belies a tremendous underlying sense of craft. It was really great to see him again.” – Jowi Taylor, Six String Nation

“…a beautiful snapshot of the Canadian landscape. This native Nova Scotian’s voice is like no one else… all Canadian, hints of Cockburn, Cohen and Lightfoot… well-crafted and skillfully written songs… dazzling guitar playing… Corbett is a true folksinger and Son of a Rudderless Boat is a marvelous listen.” – Penguin Eggs Magazine

“Corbett embodies everything that is wonderful about the song as an art form, while most folk singers today are mere shadows of great singer/songwriters.” – Jeff Liberty, KV Style News (NB)

From the Charlottetown Guardian…

From the Halifax Daily News…